Located at a distance of about 40 Km from the city of Thoothukudi, Tiruchendur temple is the second abode of one of the six chosen spots (Nakkirar) of Lord Murugan. It is also known as Sathurvedi Mangalam , Thirucheeralaivai, Thirubhuvana Madevi and Jayanthipuram. It is a seashore temple. The temple is very famous and is praised in many Tamil literatures including in Thirumurugatru padai, Arunagirinathar, Chilapathikaram, Devaram and Purananooru. The temple is located on a hill called Chandana hill on the shores of the sea. It is one of the best divine destinations of Tamil Nadu and is a must visit for all the followers of Lord Murugan. 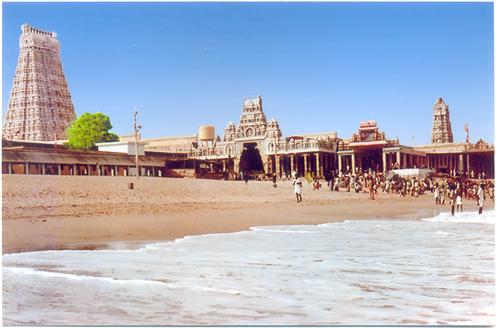 History of the Tiruchendur temple dates back to a time when Surapadma, an asura was ruling Veera Mahandrapuri. He had received many boons from Lord Shiva for his several austerities and due to the same became arrogant resulting in capture of the three worlds. After receiving many complaints from other Gods regarding the same, Lord Shiva opened his frontal eye to create a son to kill him and his immortal army of asuras. From the opening of the frontal eye of Lord Shiva six sparks of fire were released, which were received by river Ganges through fire and passed on to Himalyan lake Saravana Poigai to finally being transformed into six babies.

After being clasped by the Goddess Uma, these babies became lord Arumuga with six faces and twelve arms. Once Aruguma reached at his youth, Lord Shiva asked him to destroy Asuras resulting in a war between Asuras and Lord Muruga to release the other Gods. On the sixth day of the battle, Lord Muruga pierced Surapadma(who was transformed as a frightful mango tree by himself ) and broke it in twain. These broken pieces were transformed into a peacock and chanticleer and took by Lord Muruga as his vehicle and banner respectively. After the desire of Lord Muruga to worship his father Lord Shiva, Tiruchendur temple was built by Mayans here.

The temple is spread over an area of 1,26,507 Sq feet and is a south facing temple built in the 17th century AD. Shanmugha Vilasa Mandapam and Rajagopuram are the two most important parts of the architecture of this temple. Shanmugha Vilasa Mandapam is adjacent to the main temple and is 86 feet broad, 90 feet long and 137 feet high above yalimattam and is supported by 124 columns. It consists of 9 storeys shown by 9 Kalasams ( copper finial stoopies). It was initially built in white stones, but later converted into granite stones by Mauna Swami. It is believed that staying in this Mandapam gives relief from diseases. The second main part of the architecture – Rajagopuram is 90 feet broad and 137 feet long. It is the only Rajagopuram, which is in western side unlike other temples of Tamil Nadu (Usually they open in eastern side). The reason behind this is its closeness to the sea and possibility of danger involved from sea erosion. 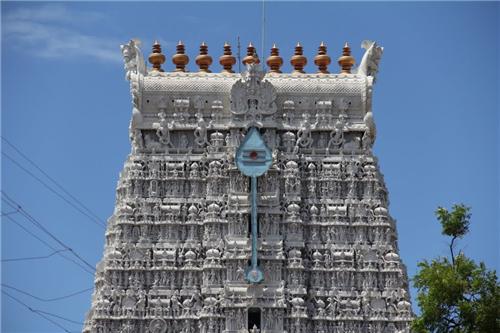 How to Reach at Tiruchendur Temple

The temple is located at a distance of about 40 KMs from Tuticorin, 60 KMs from Tirunelveli and 80 KMs from Kanyakumari and buses are available from Madurai, Rameswaram, Virudhunagar, Tirunelveli, Tuticorin, Kanyakumari, Dindigul, Bodinaikanur, Tiruchirapalli, Kovilpatty, Rajapalayam, Srivilliputhur and Erode for this route on a regular basis. Special train services are available from Tirunelveli to the temple on a fixed timing regularly. Air travel is possible from Thoothukudi and Madurai both for the distant travelers. Although you must plan your trip accordingly, as the first pooja starts at 7:00 AM while the last one starts at 8:30 PM out of the famous nine Kala Poojas of the temple.

Eating and Accommodation at Tiruchendur Temple