It would be precise to say that Manapad Beach is a surfer's paradise. It is one of the most visited destinations of entire Thoothukudi district. It is a small fishing town located at a distance of about 50 Km from the city of Thoothukudi. It is known for its beach and three small churches built here in the past. Holy cross church is the most famous one of all of them and has a rich history and many legends associated with it.

History of Manapad goes back to the early 14th Century, when a Portuguese ship was caught in a ghastly storm shattering its rear mast. And as per the demand of time, the captain of that ship promised to build a Cross out of the broken mast if they escaped alive, in his prayer. After their survival, he did the same and the Cross stands outside the shrine commemorating the original. This story dates back to 1540, while after only a few years, St. Francis Xavier came to Manapad for his missionary activities and built a Shrine at the altar with that same Captain’s Cross. After its construction, a true cross was brought to Manapad from Rome via Cochin in 1583.

Manapad is famous for its beach and three small churches, out of which Holy Cross Church is the most famous one. It comes under the most renowned Christian pilgrimages of South India and the fact that St. Francis started his missionary activities from this place only, adds to its glory. 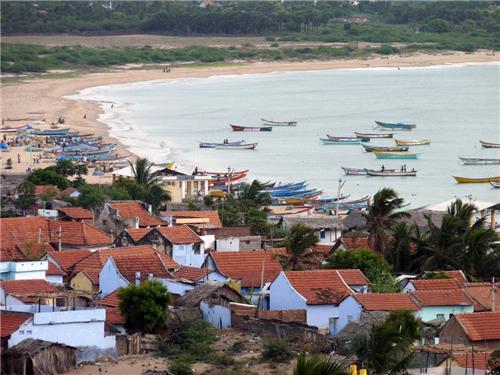 Manapad Beach is the most famous amongst the surfers of India. Its coastline is formed by several layers of lava accumulated over hundreds of years, providing it the unique and best wave formation required for surfing.

This is the most famous pilgrimage place of Manapad and attracts thousands of devotees all around the year. The church is built on a cliff and an annual festival is held in the month of September ((1st September to 14th September) to showcase the relic of a true cross.

Apart from these two, there are many tourist attractions are located here. Some of them include, Solitary Beach, St. Francis Xavier’s Grotto, Blue Lagoon, Melodic Sands Beach and Lighthouse.

How to Reach at Manapad

Reaching Manapad is very easy as the place is closely located to the city of Thoothukudi at a mere distance of about 45 Km. It is very easy to get a bus from the bus stand of Thoothukudi and reach Manapad. For all those people traveling from remote location, flying to Tuticorin first and then booking a cab or taxi or alternatively taking a bus to here are the best options available. If you are travelling from nearby places, it is advised to take a train and then a bus to reach here.

Places of Interest around Manapad