Kalugumalai is located at a distance of about 85 Km from the city of Thoothukudi in the Taluk of Kovilpatti in Tamil Nadu. It is also known as Kazhugu Malai. This place is famous for many ancient temples of different religions. One of the most famous of all of them is the rock cut Jain cave temple, which is also known as Jaina Abode. Other temples of the place include an unfinished 8th century Pandyan monolith cave temple - Vattuvan Koil and Murugan temple.

Jaina Abode is a rock cut temple located on a hill in Kalugumalai and dates back to the 8th-9th century A.D. It is known for its rock cut images of Bhagawan Parshwanatha and other tirthankaras of the Jain religion. Some of these tirthankaras include Parvanatha, Neminatha, Mahaveera, Bahubali and Adinatha. It is a perfect example of the Jain architecture of ancient times. Image of Bhagawan Parshwanatha also have two Yakshas on its sides. The main deity of the hill on which the temple is located was called Araimalai Alwar. Some of the Jain images have labels in vattezhuthu script. All of the donors, figures and provisions made for the offerings have special mention of their names in epigraph. Donors include, cultivators, carpenters, smiths, potters and other workers with some high ranking persons, who have titles of Kavidi, Etti and Enadi at that time period. Figures are of departed souls to remember them always. There are around 150 relief sculptures in this temple and other figures were made by the followers of Jain religion from a number of other villages. Additionally, provisions were recorded to explain Jain Siddhanta to the followers of the religion. 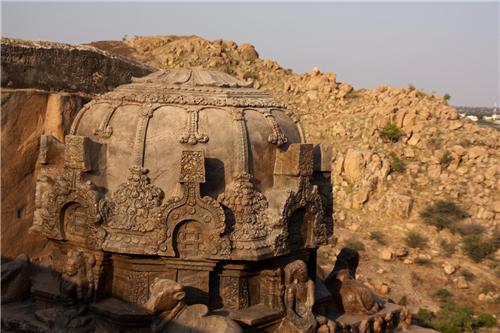 Another marvel built during the 8th and 9th century in Kalugumalai, Vettuvan Koil is a renowned Hindu temple. It is known as Sculpture’s Paradise in English language and is built in southern temple style of Pandya era. It is an unfinished Pandyan monolith cave temple having around 122 sculptures of Hindu Gods. All of the statues are carved out from fine granite and showcase the traditions and religious art of Tamil culture of that era. It is the only monolithic Pandyan Kovil which has survived the rampage of time. Beauty of this temple can be easily understood from the fact that it is built by digging out around 7.5 meters of mountain in a rectangular fashion and in the middle of the same the temple is sculpted from a single piece of rock. It has a central hall for the main deity, where in later days the idol of Ganesha was kept to worship, and an entrance. There are sculptures of Dakshinamoorthy, Vishnu, Brahma and Uma Maheswarar situated here at the top of the temple as only the top portion is completed.

It is another famous divine destination of Kalugumalai with a more neoteric architecture as it was built in 18th century. It is also built on a hill and the entrance and main deity halls were dug out from inside the foot hills of Kalugumalai. The temple has other parts as well, which were added as external structures. Presiding deity of this temple is Murugan and his wife Deivanai. There are many other shrines are located here including the shrines of lord Vinayakar, Akilandeswari, Shiva and others. 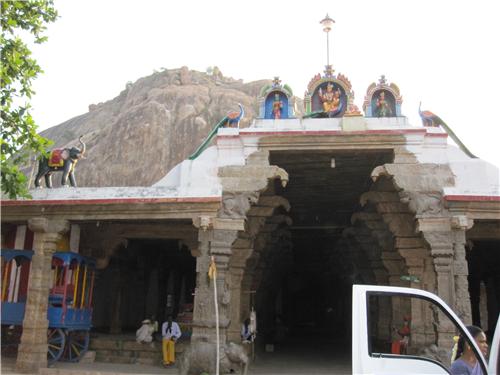 Apart from all of these temples, Vinayaga temple and Ayyanar temple are also located in Kalugumalai. First one is located at the top of the Kalugumalai hill while the latter one is located on the way to Jaina Abode


How to Reach at Kalugulamalai

Eating and Accommodation around Kalugumalai

Karthik Hotel and Captan hotel, both located at Sivakasi-Alangulam Rd are one of the closest accommodations available to stay here. Although one can also stay at hotels situated in Kovilpatti, where many restaurants are also available to eat.